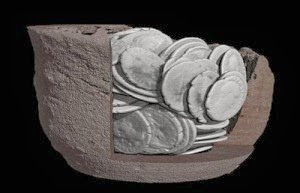 Mana to Heaven: Offerings to the Gods in Roman Britain

from blog.prehistoricshamanism.com: It was in 2010 that a metal detectorist, who opted to remain anonymous, heard the tell-tale bleep notifying him of metal below his feet. He was part of a club detecting over land near Selby in Yorkshire. Digging gently down, and hoping to find a Roman coin, the metal detectorist was astonished when he came across two pots stuffed full with coins. Knowing this was now a job for professionals, he called in archaeologists via the hugely successful Portable Antiquities Scheme.
Such a large find of coins was instantly classed as treasure and the British Museum had a chance to buy it and put it on public display. I caught up with the hoard in Bristol, as part of its national tour, and it was incredible to see the silver coins spilling from one pot that was broken, whilst the other was so stuffed full the coins had actually fused together over the millennia.

Incredibly, the solid mass of coins could still be identified through something called Microtomographic Volume Imaging, which, in English, means using X-rays to identify every coin singularly (a general image of the pot is shown above). From this, researchers could tell each pot contained 201 (unbroken pot) and 99 (broken pot) Roman denarii (the small silver coin of everyday use) dating from the last years of the Republic right through to coins dating to AD 181. It seems remarkable that so many historical coins would have still been circulating so long after minting, so it is possible they had been collected and kept for many years, perhaps even centuries.

Initially, the find was reported as a chance loss of somebody’s life savings, buried in the ground for safe keeping but, unfortunately for the owner, never retrieved. This seems to be the standard approach to all coin hoards, at least initially, as it is hard for modern people to imagine giving away so much wealth for any other reason. We no longer offer such gifts to the Gods but there is something the X-rays found in both pots that suggest this may have been the true intention of whoever buried it.
In between the coins, the X-rays revealed small organic material (preserved only because the coins were so tightly fused), which turned out to be chaff from spelt-wheat grains. This was the grain from which Romans and Romano-Britons made their daily bread. But why put grain in with a coin hoard, unless both were intended as a gift to the Gods? Could these grains represent the first harvest of the year, offered in thanks for a successful year of farming?

Writing of an earlier time, Roman historian Siculus tells us that the inhabitants of Britain burnt their “first fruits” on a bonfire as an offering to the Gods in thanks for the harvest (he also talks about the odd human prisoner being thrown on as well for good measure). The Greek historian Arrian adds that Celtic people always offer the first fruits of the hunt to the Gods in a similar gesture of thanks. Perhaps the grain in the jars was the “first fruits” of the harvest, not burnt but buried in the ground.
If grain was a usual offering to the Gods from the first take from the harvest, then this particular year it was boosted by the addition of a small fortune in silver denarii. But why this year? The only event that occurred around 181 AD (the date of the last coin in the hoard and hoards are usually deposited close to the date of the last coin) is the overthrow of the Antonine Wall by the northern tribes and the retreat of the Romans to Hadrian’s Wall. It’s possible this may have caused repercussions further south, especially if it led to increased militarisation of the area.

Perhaps our farmer at Selby, probably an estate owner given the sheer wealth he or she gave away, had had a good harvest but, with the unrest in the north, feared for the future. So this year, as well as giving his or her first fruits to the Gods, he or she added the family’s greatest treasure, an heirloom passed down and added to across generations. It would have been a momentous event, seeing so much money disappear into the ground and perhaps gave the family hope that they would be safe from the turmoil. I hope that was true and that the Gods smiled on their harvest for a good few years afterwards.