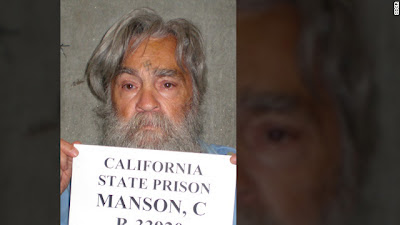 from cbsnews.com: New photos have been released of Charles Manson, the leader of the "Manson Family" cult responsible for a series of brutal murders in California in 1969. The release of the new photos come a week before his parole hearing. At the request of CNN, the California Department of Corrections released two photos reportedly taken in June 2011 at the state prison in Corcoran, Calif. A department of corrections spokesperson says the new photos were taken due to a change in Manson's appearance, CNN reports. Manson originally received a death sentence in the infamous murder of actress Sharon Tate and six others by a group of his followers. But his death sentence was changed to life in prison after California's death penalty was overturned for a period during the 1970s. Manson, whose parole hearing is schedule for April 11, has been denied parole 11 times, CNN reports.