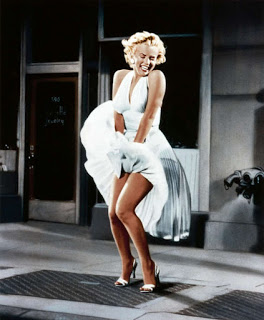 Marilyn Monroe was, perhaps, first mind-controlled sex slave to reach celebrity status.  Techniques gleaned from Project MKUltra and intended for psychological warfare, found a place also in victimizing young women for sexual favors.   It's as if ugly old rich men were a ready market with the product to fill demand:  mind-controlled sex slaves.   Vigilant Citizen (VC) paints a more intimate portrait of Marilyn Monroe (part 1, part 2), giving reader greater insight into her life - a tragedy from start to finish.  VC first advises there's more behind odd celebrity behaviors than reported in media:  "While many biographers explain away Marilyn’s hardships with 'psychological issues', piecing together facts about her life combined with knowledge of the dark side of Hollywood reveals something a lot darker: Marilyn Monroe was one of the first celebrities subjected to Monarch mind control, a branch of the CIA’s MK Ultra program... Through trauma and psychological programming, Monroe a became high level puppet of the shadow elite, even became JFK’s Presidential Model."  Britney Spears and Anna Nicole Smith are examples of Marilyn Monroe's counterparts today. VC also points out fascination with Monroe by current celebrities, especially Spears.  Does it hint at status still held by Marilyn Monroe, who remains "ultimate symbol of Beta Programming"?


The daily life of Marilyn Monroe was, in reality, a far cry from what a fan might imagine.  "While Monroe projected the image of a glamorous sex symbol, the reality of her day-to-day life was pretty much the opposite: She was controlled, abused, exploited and even traumatized by various handlers while living in prison-like conditions," reports VC.  A quote in article taken from "The Illuminati Formula to Create a Mind Control Slave," by Fritz Springmeier: "They stripped Marilyn of any contact with the outside world to insure that their mind control would work. They were afraid that something might go wrong with the first Presidential slave that was allowed to be highly visible to the public” A mind-controlled individual can break programming, and in 1962, scientists knew far less about it.  Monroe, as a result, had an extremely guarded life thrust upon her.  (An alternate link to Springmeier's book is available here.)

VC also makes a connection between Monroe and Satanist Anton Lavey: "...before becoming famous, Norma Jeane went by the name of Mona and worked as a stripper at a Burlesque house in Los Angeles. There, she came in contact with Anton LaVey, the man who would later found the highly influential Church of Satan. According to [Fritz] Springmeier, LaVey was an MK handler and Monroe became one of his 'Kitten' slaves."

Also, the article introduces readers to another detail about Monarch sex slaves learned from Springmeier in his book:: "High level' Monarch slaves are often identified with gems and stones to identify their status. Presidential models are reportedly identified with diamonds.
Emeralds mean drugs, rubies mean prostitu- tion, diamonds (rhinestones) Presidential Model work."  VC follows with his own observation:  "The dress worn by Monroe while singing 'Happy Birthday Mr. President' contained more than 2500 rhinestones ... [and] was actually one of her last public appearances, as she was found dead less than three months later."

VC follows Monroe's story to its terminus - a common fate for a Monarch sex slave: "When Monroe’s programming lost its effect and she started to break down, some argue that she was 'thrown off the freedom train', an MK ULTRA term for designating slaves that are killed when they are not useful (and potentially dangerous) to their handlers."  You'll probably view Marilyn Monroe singing "Happy Birthday" to the President a little differently, now.  Presidential model Monroe sings to the President she services in front of the entire world below.