marion cotillard throws a puppy off a cliff

or, how we're missing the forest for the trees...

from paul joseph watson: A smear campaign against Oscar-winning French actress Marion Cotillard is now in full swing, with the establishment media attempting to hide the fact that her comments about 9/11 echo the sentiment of hundreds of widely-respected intelligence and scientific experts in addition to public opinion...

By dredging up statements made by Cotillard over 12 months ago, the spin doctors had hoped to isolate and ridicule the actress and make an example out of her while debunking 9/11 truth at a point in time where the official story holds about as much credibility as a used car salesman. 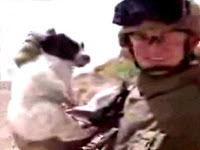 from paul joseph watson: ABC News has weighed in on the shameful puppy killing video controversy - by running defense for the perpetrators and claiming that hurling the defenseless animal off a cliff was "a way of coping" with a stressful situation for the Marines involved.

The report canvasses psychologists who agree that killing puppies is a logical response to coping with "oppressive surroundings."

Recall that when Osama bin Laden was killing dogs, a propaganda tape that the U.S. media went gaga over ad infinitum, it was an insight into pure evil, but when our boys do it, then it's just to blow off some steam.

Of course there is no mention within the ABC report of the scores of other examples of troops and mercenaries in Iraq killing dogs, blowing up kittens, torturing kids, raping kids, randomly gunning down civilians on highways and beating innocent civilians to death at internment camps like Abu Ghraib.