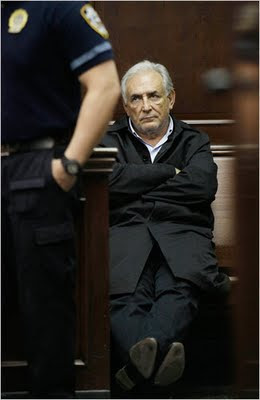 from washington post: A New York criminal court judge denied bail to Dominique Strauss-Kahn, head of the International Monetary Fund, after he was charged with attempting to rape a housekeeper at a hotel in Midtown Manhattan. Strauss-Kahn, also charged with a criminal sex act and unlawful imprisonment, made his first courtroom appearance after being pulled off a Paris-bound plane minutes before takeoff Saturday afternoon. Prosecutors had planned to bring him before a judge Sunday before deciding to delay a day so they could search him for physical evidence. Authorities allege that Strauss-Kahn, 62, attempted to rape a housekeeper at the Sofitel in Midtown Manhattan, where he was staying; police said she later picked him out of a lineup. He planned to plead not guilty, according to his attorney, Benjamin Brafman, who has defended a number of high-profile clients...

The sexual assault charges cast uncertainty over global efforts to prevent Europe’s debt crisis from spinning out of control and raise questions about the future of one of the world’s most powerful financial institutions. At the Washington-based IMF, which makes emergency loans to struggling economies, Strauss-Kahn has been a muscular advocate for aiding Greece, Ireland and Portugal as they have fought to avoid insolvency. A default by a developed European economy would shock the global financial markets and endanger the nascent economic recovery in the United States. The IMF on Sunday named Strauss-Kahn’s second-in-command, former banker John Lipsky, as his replacement.

related econocrash updates:
US debt limit reached, government halts pension investments*
both medicare & social security, for the first time, spent more than they received*
treasury prepares to plunder another $45b from retirement funds as it issues $110b more debt next week*
ubs still popular with both obama & gop after paying more than $1b in fines*
'we are 100% certain that governments will start banning bitcoins in the next 12 to 18 months’*
gavin andresen, project lead of bitcoin, invited to speak at cia*
the people vs. goldman sachs*
'good hair': hair extension thefts on the rise*
video: 'robin hoods’ attempt to raid jpmorgan-chase shareholder meeting*