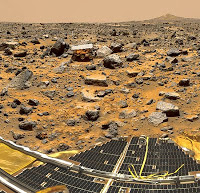 Mars Direct is a plan, first, proposed in a research paper by NASA engineers Robert Zubrin and David Baker in 1990, and later, expanded in Zubrin's 1996 book, "The Case For Mars". Mars Direct proposes a cost effective means to send men to Mars in a series of missions in 26 month intervals. The first mission sends cargo, an Earth Return Vehicle(ERV) and a nuclear reactor with a supply of hyrdogen to manufacture oxygen and methane to be used for return flight. A second mission sends a four man team in a vehicle to be used as housing once it achieves a soft landing on the red planet. The vehicle remains tethered to the last stage of its booster rocket during flight to generate artificial gravity to mitigate effects of weightlessness. A second cargo ship, is also, sent identical to the first to be used by a second crew. The process continues until a self-sustaining colony grows and becomes established. Zubrin, president of the Mars Society, believes all the ingredients necessary for success are there and simply asks, "if not us,” he said, “then who? If not now, then when?...We can make Mars habitable!"