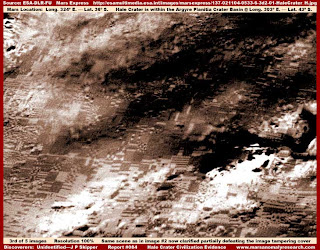 Mars Anomalies Researcher Joseph Skipper long-convinced images of Mars are doctored, some time ago, had an image come into his possession that revealed more! A viewer sent him a Mars Express Hi-Res Stereo Cam image (pictured), where obfuscation techniques were defeated with some work. In "Hale Crater Civilization Evidence," Skipper discusses his experience with Mars Express images from the European Space Agency (ESA)," ..the ESA imaging is so heavy with map type carpeting image tampering obfuscation that quality anomalous discovery information can very rarely be found in it."

"This problem is so prevalent in the ESA imaging as released to the public that I long ago came to the personal conclusion that it generally just isn't practically worth me devoting much of my very limited time to trying very hard to find something in it. Yet, no matter how diligent the tampering, mistakes are still made in its application and such mistakes can produce discoveries providing some real information. That is the situation we have here in this report with this image."

Skipper, a dedicated researcher, expressed his gratitude to viewer for her effort and let the picture speak for itself, " but, it was plenty good enough for me to see by her graphics work that defeating the Hale Crater image tampering covering was possible in the image she had found, at least to a greater extent than heretofore in my experience...The civilization evidence is so thick here and in such variety that I have elected not to obscure anything with arrows and labels under the assumption that most of you can recognize much of this evidence for what it is." Skipper feels the image is a powerful argument and reflects human activity! It certainly seems so!