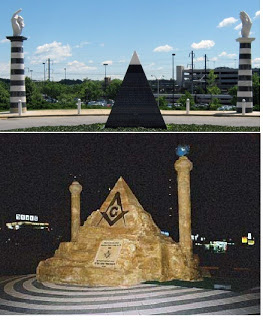 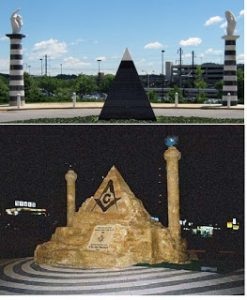 Vigilant Citizen (VC) points out obvious masonic symbolism in front of the IRS Headquarters in New Carrolton, MD (picture, top). The IRS building built in 1997, may not have many artistic symbols, but the few present reveal everything an observer needs to know! In front of the IRS building, the art,"...features a pyramid with a capstone between two pillars. The black and white stripes refer to the Hermetic concept of duality," observes VC. Duality concept can be traced back to the pillars at the entrance to Solomon's Temple, covered in previous post here. The picture (bottom) is of a masonic monument in Israel. An explanation provided by Washington Post draws VC's derision:

“'The most striking elements are the huge, white marble hands atop each column. Each hand points skyward, one with the forefinger extended; the other is an open hand, the fingers ever so slightly cupped.

The 1997 work is called 'Vox Populi,' which is Latin for "the voice of the people.” The hand with the raised index finger represents deliberation, argument, the gesticulation of a speaker giving his or her opinion. The hand with an open palm represents the act of voting or taking an oath.'”
- The Washington Post, "The Big Hands of the Law"

The Pyramid is turned to next and raises questions by VC seeing only contradiction: "Between the two pillars is the most recognizable symbol representing the occult elite: A pyramid with a shiny capstone. On the pyramid is written the US Constitution, which famously starts with “We the People”.

The shiny capstone represents the elite, who appear above the Constitution. Below, the remaining black portion represents, "We The People."  Do the elite believe they are above the Constitution? VC finds most disturbing, and possibly, represents a warning on plaque of one pillar: “The Bill of Rights was not ordained by Nature or God. It’s very human, very fragile.” Hmmm, that’s … unsettling".

VC began article: "In fact, fully understanding the origins and the meaning of the symbols in front of the IRS building means understanding who are truly in power in America (and around the world), what they believe in and what they truly think about us, the masses." An apt summary supplied by VC: "As the official IRS motto goes: Service plus Enforcement equals Compliance. In short, maybe the finger that is pointing upwards should be the middle one."