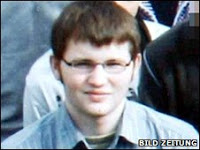 some answers bring more questions as mass shootings & rampaging animals are force fed to a frazzled public... they don't call it monkey-see monkey-do & copycat effect for nothing:

from russia today: After the horror of fifteen people being shot dead in a German school, the focus is now turning to what could have caused the gunman to do what he did. School shootings are a type of attack that seem to be more and more frequent in recent years. In this latest incident, nine students and three teachers were the first victims of the teenage gunman at a school near Stuttgart. Another person was shot at a nearby clinic before the killer fled in a car with a hostage. Finally, the two passers-by who died in the shoot-out with police were Tim Kretschmer’s last victims. The tragic total is 15 people dead, plus the gunman himself.

from natural news: In a story widely published across the 'net, police investigator Siegfried Mahler states on the record that the shooter (Kretschmer) "underwent several treatment sessions for depression at a psychiatric clinic" and was "...prescribed a session of outpatient therapy, which he never began." Thus, the shooter was on psychiatric medications and then quit using them. This created a classic antidepressant withdrawal crisis which is exactly what leads to extreme acts of violence against self or others. As we reported in our previous story, virtually every school shooting that has taken place in the last two decades was carried out by those who either take psychiatric medications or are attempting to quit them.

after attacks, europe hurries to tighten gun laws
from ap: Several European countries have restricted gun laws in the wake of school massacres, gang violence and other gun-related crimes:

_Finland announced plans Wednesday to impose stricter restrictions on firearms, including raising the minimum age for handgun ownership from 15 to 20. The proposal was prompted by two school massacres within a year in which lone gunmen opened fire on classmates and teachers.

_Germany, where a gunman killed at least 11 people Wednesday, raised the legal age for owning recreational firearms from 18 to 21 following a 2002 shooting in Erfurt that killed 16 people, including 12 teachers.

_Belgian lawmakers passed strict new gun control laws in 2006 in reaction to the racially motivated shooting deaths of a toddler and her black baby sitter in Antwerp.

_Swiss citizens are demanding a referendum aimed at confining army weapons to military compounds and banning private purchases of pump-action rifles and automatic weapons — following a spate of suicides and homicides.

_The Portuguese Parliament is currently discussing a government proposal to tighten gun laws, including denying bail to anyone suspected of a gun crime.

_Denmark's government said last week it will raise the penalty for illegal gun possession as part of a crackdown on gang violence that has killed three people and injured 25 in recent months.

_European Union lawmakers proposed tighter gun control across the bloc last year, including guidelines saying that only people over 18 not deemed a threat to public safety could buy and keep guns. EU members have until 2010 to adopt the measures.

In addition, some U.S. states have recently tightened gun laws as well:

• Colorado, a year after the 1999 Columbine High School shootings, made it a felony to buy a firearm for another person who should know the transaction is illegal, barred anyone from giving a firearm to a juvenile without the consent of the parents; made it illegal for a person not to try to prevent a juvenile from committing a gun crime; and increased the penalty for possession of a weapon by a felon. But three years later, the state expanded gun rights instead, by requiring sheriffs to issue gun permits to people who pass a criminal background check, prohibiting local governments from making gun laws more restrictive than the state's, and abolishing local registries of gun owners.

• In Virginia, where a student killed 32 people at Virginia Tech in 2007 before committing suicide April 16, 2007, the governor signed an executive order requiring that anyone ordered by a court to get mental health treatment be added to a database of people barred from buying guns.

the aftermath in samson, alabama

from wikinews: Ten people have been killed and several injured across two small towns of Samson and Geneva in Alabama after a shooting incident by a gunman. The victims include the gunman and the wife and child of a sheriff's deputy. The gunman started his killing spree in a gas station in Samson after 5 p.m. Eastern Time and his rampage ended 12 miles away at the Reliable Metal Products plant, a manufacturing plant in Geneva. According to a report by CNN from Alabama state Senator Harri Anne Smith, who represents Geneva County "he [the gunman] was shooting at just ordinary people going about their business". The gunman was identified as Michael McLendon, who once worked at the Reliable Metal Products plant. He took his life at the plant after an encounter with the police. The victims include six adults and a child. The investigators are not sure what caused this catastrophic event to take place. Samson and Geneva are two small rural towns with a population of less than 5000 in Alabama near the Florida border.

and, as if all this wasn't enough, we are also experiencing a 'when animals attack' meme, kickstarted by the attack of the medicated monkey...

elephants run amok in india due to abuse & pollution
from ecoworldly: In a deluge of incidents since last October, 14 people have been trampled or gored to death by rampaging elephants in the Indian state of Kerala. The usually mild-mannered, peaceful animals have likely been driven to retaliate due to polluted conditions and widespread abuse. 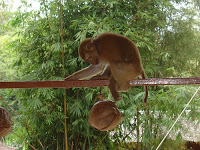 from planetsave: Following the news of a 31-year-old chimp who evidently likes to plot out attacks on his Swedish zoo visitors, a monkey in Thailand became tired of his owner beating him and forcing him up trees to collect coconuts — so he threw one straight at the owner’s head.

update: man dressed as 'the joker' shot dead by police
from guardian: A man dressed as Batman villain the Joker has been shot dead by police in America after pointing a loaded shotgun at them. The dead man, who was said to be obsessed with the character, was wearing full costume and makeup when he was challenged by officers in a national park in Virginia, according to legal documents. The FBI named him as army specialist Christopher Lanum, who was wanted as a suspect over the stabbing of a fellow soldier at Fort Eustis, a major army base in the state, several hours before. Lanum's girlfriend, Patsy Ann Marie Montowski, who was with him when he was shot, told investigators that the soldier idolised the Joker, played in the most recent Batman film, The Dark Knight, by the late Heath Ledger. The events began at the base early on Sunday when Lanum become embroiled in an argument with a fellow soldier, Mitchell Stone, allegedly stabbing him and using a stun gun on him.