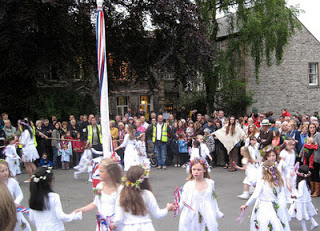 May Day, Beltane and the Maypole

Happy May Day!  The Maypole dance has a pagan history unknown to the public.  An Examiner article, "May Day, Beltane and the Maypole," provides an insightful background of celebration. "May Day, or Beltane, falls halfway between the spring equinox and summer solstice. For the ancient Celts, it was one of the four major fire festivals. Beltane heralded the light half of the year, opposite on the calendar from Samhain, which heralded the dark half," explains article. The Maypole reminds human beings of solemn respect for nature that's embedded in the very dance. "Because it is a celebration of spring, the connection to a fertility rite is clear. Every pre-Christian culture had a similar celebration. In ancient times, humankind lived or died by the cycles of nature. The changing seasons therefore had greater meaning than they do in modern times," clarifies importance of fertility and a successful growing season to humanity through most of its history.  The article then describes evolution of the Maypole dance:  "The earliest Maypole dances were circle dances. Ribbons weren’t added until the middle ages when mummers designed a more theatrical dance. There are theories that the pole was a phallic symbol and the early decorations of wreaths, combined with circle dancing, represented the female aspect surrounding the male phallus. There are theories that wrapping the pole in ribbons during the ribbon dance also symbolized the female embrace of the male symbol."  Now, you know, there's more to May Day celebration than, perhaps, you previously thought?