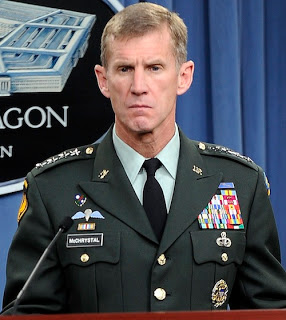 McChrystal Falls On Sword After Truthful Comments On Afghan War

from kurt nimmo: The farce that is the war in Afghanistan is coming apart at the seams. General Stanley McChrystal’s sharp comments about Obama, Biden, and the administration published by Rolling Stone are not so much about disrespect, as the script-reading corporate media talking heads would have it, but rather about a policy in disarray in Afghanistan.

General Stanley McChrystal tenders his resignation
from telegraph: A senior Capitol Hill source tells me that General Stanley McChrystal had tendered his resignation to President Barack Obama and that the White House is actively discussing a replacement who could be quickly confirmed by the Senate. The source said that among the names being touted as possible successors are General James Mattis, the outgoing head of the US Joint Forces Command and due to retire after being passed over as US Marine Corps commander, and Lieutenant General William Caldwell, commander of Nato’s Training Mission in Afghanistan. Of course, offering to resign is not the same as actually resigning and it remains to be seen whether Mr Obama will accept the resignation. Donald Rumsfeld offered to resign as Pentagon chief on more than one occasion but President George W. Bush requested that he continue in post before eventually firing him in November 2006.

Pat Tillman's mom tried to warn Obama of McChrystal
from politico: The mother of the slain football player and Army Ranger Pat Tillman sought to warn President Obama against making General Stanley McChrystal his commander in Afghanistan. Mary Tillman said in an unpublished interview this year that she wrote to Obama and called Senators and members of Congress seeking to block McChrystal's appointment when she learned that he was under consideration for the post... McChrystal has been accused of involvement in covering up of the fact that Tillman had been shot by his own comrades, having approved a citation for a posthumous medal that attributed his death to "enemy fire," though the general also penned a memo warning the White House against describing the circumstance of Tillman's death for fear of future embarrassment. An official investigation blamed McChrystal for “inaccurate and misleading assertions” in the formal recommendation of Tillman for a Silver Star. Mary Tillman said she emailed Obama a short letter saying that McChrystal was not what he seemed.