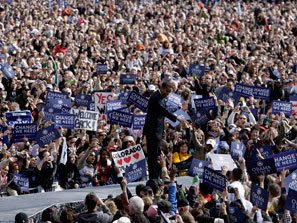 from politico: Media executives must have been paying attention last week when President Bush declared a state of emergency for Tuesday's inaugural. CNN's Washington bureau chief David Bohrman, for one, issued a "news emergency" of his own... "It's the biggest event any of us have ever had to cover," Bohrman said. While there have been several massive Obama events this past year — Berlin, Denver, and Chicago's Grant Park — the inaugural is proving to be the most complicated. Covering it requires dealing with a vast number of moving parts, among them the challenges for camera crews of literally moving around to cover the sprawling event. Much of Washington will resemble an occupied city, complete with closed streets, checkpoints, and a 40,000-plus security force... An extra million people on Tuesday significantly increases gridlock and cuts down on the ability to move television correspondents, camera operators, newspaper reporters, photographers and bloggers. Even seasoned professionals, accustomed to the crowds and pomp and circumstance of inaugurals past, express disbelief at the sheer crush of attention surrounding the moment Barack Obama plants his right hand on the Bible... Chris Isham, CBS's Washington bureau chief, said that Inauguration Day is "a much broader, multi-range circus," than Obama's large campaign events in '08, given the sheer number of positions to stake out... So covering the inaugural is shaping up to be either a giant slumber party or entering a war zone. Or a little bit of both. ABC political director David Chalian, mentioning that the inaugural will be "an all-hands-on-deck kind of event," spoke a bit more ominously about staff heading out of the bureau on Tuesday morning. "You're literally going out into the wilderness to some degree," Chalian said. "There will be no home base."