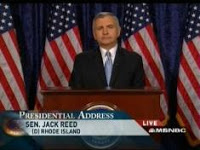 from us news & world report: In a televised speech last night, President Bush said his 'surge' strategy has produced positive results, which will allow the US to cut the number of troops in Iraq. The Washington Post say on the front page that Bush "coined a new slogan to describe his latest strategy, 'Return on Success,' meaning that further progress will enable further withdrawals". However, Bush's remarks, in which he endorsed the recommendations of Gen. David Petraeus, are receiving generally skeptical coverage. The Washington Post says Bush "made a case for progress in Iraq by citing facts and statistics that at times contradicted recent government reports or his own words." On MSNBC, Chris Matthews said, "The idea we're one of 36 countries fighting the war I think is ludicrous and why the President would throw that out there, I think it only opens him up to ridicule."

from crooks & liars: Senator Jack Reed gave the Democratic response to tonight’s surge spin President Bush’s speech to the nation on our future in Iraq and he was right on the money.

The Speaker’s office has released some fact-checking as well: Below is the transcript of Reed’s official Democratic party response, let’s hope the Democrats stand behind these words...