from wikinews: Nancy Cartwright, 51, who is a long time member of the Church of Scientology, has created a recording using her voice of Bart Simpson as part of a robocall promotion. The message surfaced early Wednesday morning on YouTube. During the message, Cartwright states that “This is a special message” and announces a Scientology conference this coming weekend at the grand ballroom of the Hollywood & Highland Center in Los Angeles where she has a speaking engagement. The message ends with a toll free number to call to RSVP… The Simpsons executives did not authorize this usage of intellectual property in this manner. Executive producer Al Jean told The Hollywood Reporter, “This is not authorized by us. The Simpsons does not, and never has, endorsed any religion, philosophy or system of beliefs any more profound than Butterfinger bars,” referencing the advertisements featuring the Simpsons for the Butterfinger candy bar.

from global research: Here we build a prima facae case supporting the idea that Hollywood continues to be a target for infiltration and subversion by a variety of state agencies, in particular the CIA. Academic debates on cinematic propaganda are almost entirely retrospective, and whilst a number of commentators have drawn attention to Hollywood’s longstanding and open relationship with the Pentagon, little of substance has been written about the more clandestine influences working through Hollywood in the post-9/11 world. As such, our work delves into the field of what Peter Dale Scott calls “deep politics“; namely, activities which cannot currently be fully understood due to the covert influence of shadowy power players… Many would recoil at the thought of modern Hollywood cinema being used as a propagandist tool, but the facts seem to speak for themselves. Do agencies such as the CIA have the power, like the Pentagon, to affect movie content by providing much-sought-after expertise, locations and other benefits? Or are they able to affect script changes through simple persuasion, or even coercion? Do they continue to carry out covert actions in Hollywood as they did so extensively in the 1950s, and, beyond cinema, might covert government influence play some part in the creation of national security messages in TV series such as 24 and Alias (the star of the latter, Jennifer Garner, even made an unpaid recruitment video for the CIA)? The notion that covert agencies aspire to be more open is hard to take seriously when they provide such scant information about their role within the media, even regarding activities from decades past. The spy may have come in from the cold, but he continues to shelter in the shadows of the movie theatre. 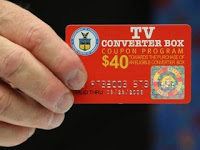 from usa today: Two weeks from today, an estimated 7 million households that rely on analog television sets – ones that work off antennas – could see their screens go blank. The temptation is to say, too bad. People had plenty of warning about the impending nationwide switch to digital TV, and an opportunity to apply for $40 coupons toward the cost of converter boxes. Unfortunately, the federal government has so fouled up the changeover that a delay in the Feb. 17 deadline is the least bad alternative.

update: house approves digital tv transition delay
from pcmag: Get ready for a summertime DTV transition. The House on Wednesday approved a bill to move the DTV transition from February 17 to June 12, by a vote of 264 to 158. The Senate approved the measure last week, so it now moves to President Obama, who is expected to sign the bill into law.

fbi didn’t keep tabs on ‘alleged comedian’ carlin’s 7 words
from ap: Talk about irony. George Carlin spent decades pushing the bounds of free speech by saying the seven words you can never say on television, but not one of them made it into an FBI file on him. Among the 12 pages in a file recently released by Carlin’s family are a couple of letters from outraged citizens who complained that the comedian had made fun of the FBI and its director, J. Edgar Hoover, during TV appearances in 1969 and 1970. There’s also a letter from Hoover himself thanking one of Carlin’s critics for defending his honor, and an internal FBI memo that quotes the director as asking: “What do we know of Carlin?” Not much, as it turned out. The memo notes the FBI has “no data concerning Carlin” other than the two letters from his critics. “Which kind of disappoints me,” laughed Carlin’s daughter, Kelly Carlin McCall, who provided the file to The Associated Press. “It doesn’t really cover any of his more radical 1970s stuff.”