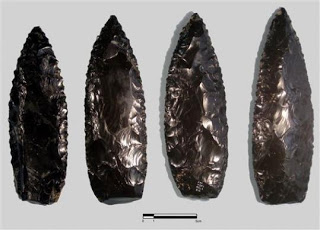 from washingtonpost.com: Traces of blood and fragments of muscle, tendon, skin and hair found on 2,000-year-old stone knives have given researchers the first conclusive evidence that the obsidian blades were used for human sacrifice so long ago in Mexico. Researchers had long seen cut marks on ancient bones that appeared to suggest varied practices of dismembering victims in many pre-Hispanic cultures, but the find announced Wednesday positively identifies the sort of actual knives that were used in the ancient rituals. Mexico’s National Institute of Anthropology and History said the finding clearly corroborates accounts from later cultures about the use of such knives to cut out hearts or cut up bodies. Researchers in Mexico had noticed what they believed were fossilized blood stains on stone knives as long as 20 years ago. But the institute said it took a methodical examination using a scanning electron microscope to positively identify the human tissues on 31 knives from the Cantona site in the central Mexico state of Puebla... The collection of stone knives is from the little-known Cantona culture, which flourished at about the same time as the mysterious city-state of Teotihuacan. Cantona preceded by more than 1,000 years the region’s most famous human sacrifice practitioners, the Aztecs.