Michigan slow to crack down on big lottery winners* 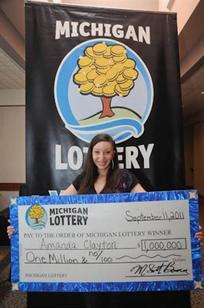 from latimes.com: Michigan’s Department of Human Services has cut off $200 a month in food aid to Amanda Clayton in the wake of media reports that she had won $1 million in the state lottery in September. To make matters worse for Clayton, who lives in Lincoln Park near Detroit, her case has been turned over to state anti-fraud officials. "DHS relies on clients being forthcoming about their actual financial status,” Department of Human Services Director Maura D. Corrigan said in a prepared statement. “If they are not, and continue to accept benefits, they may face criminal investigation and be required to pay back those benefits.” Clayton, who has two children, won the lottery in September but never told state officials that her wealth status had changed. The 24-year-old woman used the jackpot money to buy a new home and car, but continued to get $200 a month from the state to feed her family, relatives have told local television and newspaper reporters. When WDIV-TV, a local television station, reported on the case, it played into an effort in the state capital to limit taxpayer-funded benefits to people who are eligible or to eliminate them for people who have had the good luck to move on. That effort was sparked by a similar case in which a man who won $2 million in the lottery in 2010 kept receiving food benefits until last spring.

Related Update: More Than 1 in 7 Use Food Stamps in US*