russian mig shoots georgian drone
from danger room: A Russian MiG 29 shot down what Georgians say was an unarmed drone used by the ministry of interior. And guess what? They've got video (the beauty of drone warfare). The Georgians, needless to say, are really mad.

The shoot-down is part of a larger dispute over Abkhazia, a Russian-backed separatist territory. This isn't the first time that a MiG has shot down a drone; an Iraqi MiG shot down a Predator in 2002.
update: drone shootdown sparks worldwide spat
from danger room: Back in the day, countries had to shoot each others' troops, to spark an international incident. Now, all they have to do is take out a robotic plane.

from tech: As Heathrow’s Terminal 5 (T5) begins to recover from the traumas of its opening week when IT problems and a lack of staff training led to approximately 700 flight cancellations and the loss of over 20,000 items of luggage, some industry analysts are questioning whether RFID technology could help avoid similar catastrophes... The solution, according to SITA CEO Francesco Violante, is to implement a “fully-integrated global baggage management system that can direct, track and trace passenger baggage throughout the entire journey from check-in to final delivery at the destination.”

US sought authority to attack inside pakistan 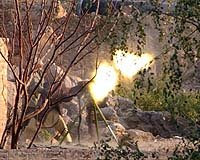 from afp: US military commanders operating in Afghanistan have sought permission to attack Pakistani militants hiding in tribal areas inside Pakistan, but so far have been denied it because of diplomatic considerations, The New York Times reported on its website Saturday. Citing unnamed US officials, the newspaper said senior officials in the administration of President George W. Bush fear that attacking Pakistani radicals may anger Pakistan's new government.