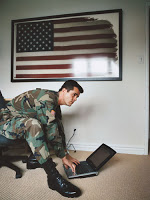 from danger room: A study, written for U.S. Special Operations Command, suggested "clandestinely recruiting or hiring prominent bloggers." Since the start of the Iraq war, there's been a raucous debate in military circles over how to handle blogs - and the servicemembers who want to keep them. One faction sees blogs as security risks, and a collective waste of troops' time. The other (which includes top officers, like Gen. David Petraeus and Lt. Gen. William Caldwell) considers blogs to be a valuable source of information, and a way for ordinary troops to shape opinions, both at home and abroad. This 2006 report for the Joint Special Operations University, "Blogs and Military Information Strategy," offers a third approach - co-opting bloggers, or even putting them on the payroll. "Hiring a block of bloggers to verbally attack a specific person or promote a specific message may be worth considering," write the report's co-authors, James Kinniburgh and Dororthy Denning.

from steve watson: Google is supplying the software, hardware and tech support to US intelligence agencies who are in the process of creating a vast closed source database for global spy networks to share information. Google is selling storage and data searching equipment to the CIA, the FBI, the National Security Agency, and other intelligence agencies, who have come together to build a huge internal government intranet. Google is also providing the search features for a private Wikipedia-style site, called Intellipedia.
flashback: google ranked 'worst' on privacy