the moon has two faces 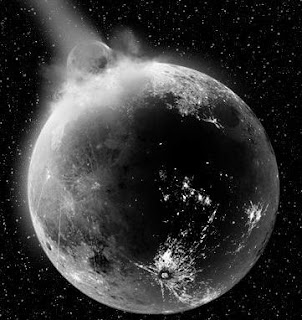 Our moon's near and far sides differ in thickness and composition. Two researchers propose a collision theory to account for the highlands on far side in a recent Nature article, "Early Earth may have had two moons". The theory proposed by planetary scientist Erik Asphaug and co-author Martin Jutzi, relies on Lagrange points to speculate a second moon orbited around Earth in the remote past. The researchers suggest a smaller moon (1/13th the size of our known moon) broke free of its Lagrange point and collided with the far side in a relatively slow impact, which resulted in an accretion of matter to form highlands instead of a crater.

The article introduces idea, the GRAIL mission's gravity survey may help explain far side's 50 km thicker crust and more mineral rich near side. "NASA's upcoming GRAIL mission, designed to probe the Moon's interior using precise measurements of its gravity, may help figure out what happened billions of years ago." The GRAIL launch is rescheduled for today, Sept. 9th.

The present writer wonders whether this story is a distraction from other reasons for looking beneath Moon's surface? Wernher von Braun's comments about the Moon "ringing like a bell" after impacts of Lunar Module and third stage of Saturn V rocket during Apollo 12 and 13 missions, seems a more compelling motive? There are also rumors, propagated by NAZI myths, of a German Moon Base, the Schwarze Sonne, a military base established on the dark side. The myth is reinforced by Operation High Jump and an Antarctic jumping point, Neu Schwabenland, both, prominent storylines in coming movie, Iron Sky.