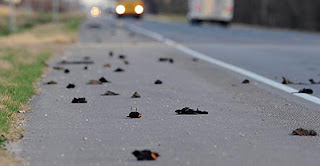 More dead birds in Arkansas – not a flashback 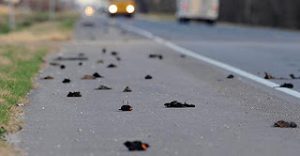 On New Year's eve for a second year, blackbirds rained on small city of Beebe, AR, according to ABC News. Two questions jump out to even most casual observer: 1) odds of blackbirds plummeting into ground on same day, one year apart? and 2) blackbirds are not known to fly at night? Kevin McKinney, a Beebe resident, believes something else may have happened, Saturday night. McKinney claims "...when the birds started dying, I had my compass out: it went crazy, spinning and unable to find north," as stated in this report. Last year's posts are available here and here. Blackbirds believed to have died upon impact due to trauma. The present writer leans towards electromagnetic anomaly, which may have caused confusion in birds, or possibly, momentary blackout? What is, indeed, going on here!