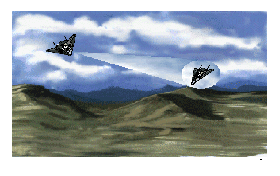 "The first holographic project originated at the Army Research Lab at Adelphi, Maryland. Coincidence or not, it was the Maryland Air National Guard which dropped the flares around 10 p.m. on March 13, seen widely in the Phoenix area, that served to confuse the situation about whether the UFOs were planes, flares, or a single huge object...

Titled 'A 3-D Holographic Display,' this November 1996 progress report for the Army Research Lab discussed research and development of "an innovative technique for generating a three dimensional holographic display...the resultant image is a hologram that can be viewed in real time over a wide perspective or field of view." As with most military intelligence studies that leak into the public domain, this one gives no significant clues about the extent to which this technology is really operational...

A second project, or proposal, from May 1996, titled "A Research Paper Presented to Air Force 2025," makes a case for the development of an airborne holographic projector to display a three-dimensional hologram for optical deception and psychological warfare. This report was authored by three military officers, including Lt. Col. Jack A. Jackson, PhD., AFIT. The extent to which this proposal was based on developments already underway, or just a flight of futuristic fantasy by the authors, is unknown."

Dr. Bruce Maccabee, in a 1999 Mufon Journal article, summarizes previous work of Bill Hamilton, who found four identifiable separate events on evening of March 13, 1997 in Phoenix. 1) 8-9 pm, a moving silent V-shaped array of lights, 2) 8-9 pm, a large black, silent, moving triangular object, 3) 10pm, numerous very bright glowing orange orbs that formed arc in sky south of Phoenix and 4) 8-10 pm, two orange lights in sky near Luke AFB west of Phoenix. Maccabee demonstrates using triangulation, 10 pm sightings were likely due to high altitude military flares. The fact there was more than a single source in the skies of Phoenix that resulted in reports, is the important point here. Was the military testing if witnesses could be convinced they were dealing with same object, whether people could readily tell difference between a real craft such as the TR 3-B Astra and a holographic version? It seems a distinctly possible test objective.

There is another aspect hinting at a military black operation. Fitzgerald reported on tragic aftermath of the Phoenix Lights in part two:

"Less than three weeks after the Arizona Lights phenomenon, Captain Craig Button, 32 years old, flying out of Tucson’s Davis-Monthan Air Force Base on a training mission over the Barry Goldwater Bombing Range, the base where the flare dropping A-10 planes had come from, flew his A-10 Thunderbolt fighter 800 miles off course and apparently then intentionally crashed it into a Colorado mountain... A month after Captain Button's suicide, Captain Amy Svoboda, 29-years-old, also flying an A-10 out of Davis-Monthan, crashed her fighter into the desert of southwestern Arizona."

Davis-Mothan is the air base reported, originally, to have dropped the flares. Did they know too much and whatever happened to bombs on the A-10 Button crashed? There is definitely more here than meets the eye! Check out Bill Warwick, investigative journalist, who presents his view on disturbing Craig Button incident at a 2007 conference on You Tube below.