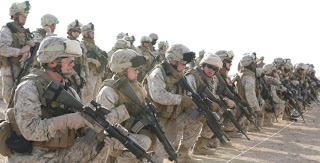 more troops to guard afghan heroin that props up banks

the use of terms like 'theater' & 'enablers' should really tell you what's going on here... this is all about the drugs.

from time: Afghanistan became President Obama's war on Tuesday [feb17], when he ordered two more U.S. combat brigades into the fight. He will send 17,000 combat troops to join the 36,000-strong U.S. force already in the theater. The fact that the units now ordered to Afghanistan had originally been slated for Iraq underscores the new Administration's shift in priorities. The reinforcements include about 8,000 Marines from Camp Lejeune, N.C., who should be in Afghanistan by late spring, and a 4,000-strong Army brigade from Fort Lewis, Wash., which should arrive in the summer. Those units will be joined by about 5,000 more Army "enablers" to provide logistical support.

the invisible hand of the market: british troops have seized £50 million of afghan opium

two-thirds of afghan police are hooked on drugs
from bbc: Sixty per cent of the Afghan police in the country's southern province of Helmand use drugs, it is claimed. The estimate, made by a UK official working in the province, was contained in emails obtained by the BBC. International forces are fighting a fierce counter-insurgency campaign against Taleban militants and other insurgents in Helmand. But British officials are clearly worried about the reliability of the Afghan police. "We are very concerned by the levels of drug abuse among the police," the British Foreign Office said in a statement.

the dea has 106 planes, so why did it charter private jet for chief?

how much of our debt comes from drug money?

from business insider: Allen Stanford forfeited $3 million in drug money back in 1999, and it's a sure thing that within his multi-billion empire he had many more drug dollars under his care. This is true not just of Stanford, but of the whole Caribbean offshore banking complex, as drug dealers are obviously interested in the regulation-light, few-questions-asked private banking system. Offshore banks, meanwhile, have grown rapidly as major purchasers of US treasuries over the years. As you can see in the chart below, they really spiked in the 04-05 range, right as Japanese holdings leveled off. According this table, Caribbean banks are now the fourth biggest holders of treasuries, having surpassed Brazil and all the oil states combined in just the last year. So again, how much drug money goes into financing our debt? And if you doubt the premise of our question, here's famed rapper KRS-One making basically the same point...