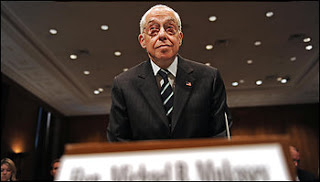 from washington post: Justice Department officials released new guidelines yesterday that empower FBI agents to use intrusive techniques to gather intelligence within the United States, alarming civil liberties groups and Democratic lawmakers who worry that they invite privacy violations and other abuses.

The new road map allows investigators to recruit informants, employ physical surveillance and conduct interviews in which agents disguise their identities in an effort to assess national security threats. FBI agents could pursue each of those steps without any single fact indicating a person has ties to a terrorist organization.

Attorney General Michael B. Mukasey said the guidelines are necessary to fulfill the FBI's core mission to predict threats and respond even before an attack takes place. The ground rules will help the bureau become "a more flexible and adept collector of intelligence," as independent commissions urged after the strikes of Sept. 11, 2001, Mukasey said in a statement yesterday.

The guidelines, which harmonize five different road maps dating back more than a generation, take effect Dec. 1. That is two months later than initially planned, and authorities said the delay was a concession to privacy advocates and Arab American groups who expressed concern that their members could be subject to racial or ethnic profiling.