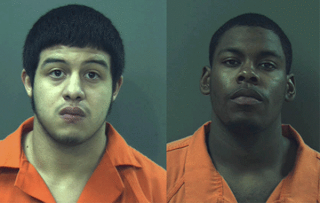 from nbcwashington: Two men have been arrested and two more are being held in the murder and brutal attack of William Bennett of Lansdowne. The suspects are allegedly members of – or associated with – an established criminal street gang, but the crimes against the Bennetts don’t appear to be a part of a gang initiation or specific gang-ritual, the Loudoun County Sheriff’s Office said. “They [the Bennetts] were simply in the wrong place at the wrong time,” Loudoun Sheriff Stephen O. Simpson said. Two of the men – Darwin G. Bowman, 18, of Annandale, VA, and an unidentified 17-year-old male from Sterling, VA – have been charged with capital murder, a charge made in crimes that usually show motive. A third man, Anthony R. Roberts, 20, of Middleburg, VA, is currently being held on burglary charges; he is also expected to receive the same murder charge. A fourth suspect, an unidentified 18-year-old man from Sterling, VA, is also being held in custody on unrelated charges. The motive behind the March 22 attacks was robbery, according to officials. A white panel van seen in the area of the attacks was key to breaking the case; it had also been spotted during a gang-on-gang assault in Sterling on February 28. All suspects are currently being held without bond. Further charges for the attack of Cynthia Bennett, who remains hospitalized, are pending, as are more arrests.

from nbcwashington: The Loudoun County Sheriff’s Office expects at least one more arrest in the death of William Bennett and brutal beating of his wife in Lansdowne despite four arrests… Investigators have executed 20 search warrants and conducted at least 100 interviews, but more police work is ahead of them. “We feel fairly confident that there’s probably a fifth person, maybe a sixth, but we’re not as confident on that,” Sheriff Steve Simpson said… The motive behind the March 22 attacks was robbery, according to officials. “Well it is hard for us to grasp something like that, but we don’t think like they do,” Simpson said. “Violence is their way of life. It’s a sign of authority, it’s a sign of power, it’s a sign of control. So violence is second nature. So to them it’s nothing, probably. To most normal decent people, it shocks them beyond belief.”

update: the murder of william bennett, part4: ashes to ashes