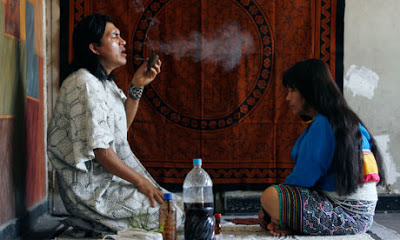 the killing of folk healers in peru causes alarm

from guardian: The Peruvian government is sending a team of officials to a remote region of the Amazon jungle to investigate the deaths of 14 shamans who were killed in a string of brutal murders. The traditional healers, all from the Shawi ethnic group, were murdered in separate incidents over the last 20 months, allegedly at the behest of a local mayor. No arrests have been made over the deaths, which took place in and around Balsapuerto, a small river port in Peru's vast Amazon region on its northern border with Ecuador, Colombia and Brazil. The prime suspects, however, in the disappearance of one victim and the murder of another are the mayor of Balsapuerto, Alfredo Torres and his brother Augusto. The two men were named in a report from the public prosecutor's office in the nearest town of Yurimaguas, which said seven of the victims had been shot, stabbed or hacked to death with machetes. Local people identified all of them as curanderos or native healers, said the vice-minister of intercultural affairs, Vicente Otta... He said that the murder suspects had sought to "legitimise the killings" by blaming the victims for the high level of infant mortality in the area.