murdoch tabloid under fire after hacking into murder victims phones

even families of 7/7 victims 'were targets of phone hacking'* 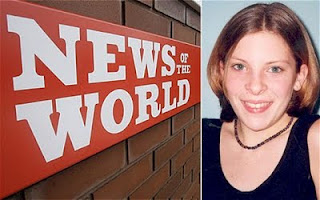 from guardian: Police officers investigating phone hacking by the News of the World are turning their attention to examine every high-profile case involving the murder, abduction or attack on any child since 2001 in response to the revelation that journalists from the tabloid newspaper hacked into the voicemail messages of the murdered schoolgirl Milly Dowler. The move is a direct response to the Guardian's exclusive story on Monday that a private investigator working for the News International tabloid, Glenn Mulcaire, caused Milly's parents to wrongly believe she was still alive – and interfered with police inquiries into her disappearance – by hacking into the teenager's mobile phone and deleting messages. News of the impending police action capped a dramatic day of unfolding developments in the News of the World phone-hacking scandal.

update: no more news of the world -
murdoch journalists stunned by paper's closure