my bank is about to fail. how about yours? 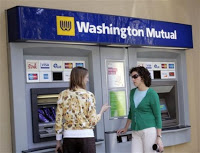 from reuters: Washington Mutual Inc (WM.N) shares sank 30 percent to a 17-year low and the perceived risk of its debt soared on worries the largest U.S. savings and loan will not find a buyer or raise enough capital to combat soaring mortgage losses. The stock closed down 98 cents at $2.32 on the New York Stock Exchange, and are down 44 percent in the last two days. It fell earlier to $2.30, the lowest since January 1991, according to Reuters data. Analysts attributed the decline in part to anxiety that potential buyers might walk away because of a pending accounting rule requiring they value the assets of targets at market prices, and perhaps the need to raise capital.

bank failures
from lew rockwell: As the fraudulent fractional-reserve banks go down, the FDIC “insurance” fund is running out. WaMu will more than empty it. I assume the Treasury will make good on its guarantees, with depreciating dollars, but there is no telling about timing. Bush could close the banks – various executive orders give him the cover – and could impose a waiting period on withdrawing “insured” deposits. It’s tough to know what to do, but I’d be sure to have some cash and gold outside the banking system and in your own control. Professor Joe Salerno has argued, against the fractional reservists, that the FDIC has in effect given us 100% reserves, or, rather, led people to act as if we had honest banking. Seldom did people worry about their bank’s soundness. We are about to find out how well fractional reserves work in the absence of the FDIC. It will still exist, but people will not believe it, and there will be bank runs galore. Act now so you are not stymied by that. And to understand sound money and sound banking, as veresus fractional reserves and central banking, see this great book.

update: wamu appears headed for sale
from ap: Ailing bank Washington Mutual Inc. appeared headed toward a sale Wednesday after a major investor removed a potential stumbling block and nervous banking regulators began approaching the most logical buyers. The New York Times, citing unidentified people familiar with the matter, said an auction of the bank was already under way, and The Wall Street Journal reported Wells Fargo & Co. and Citigroup Inc. expressed interest in a takeover. WaMu, Wells Fargo and Citigroup all declined to comment.