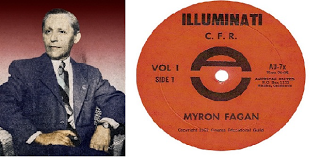 Myron Fagan: The Illuminati and the Council on Foreign Relations

Myron Fagan is an important figure in fight against New World Order. Fagan and his lectures are still accessible thanks to mp3 conversions of his sixties era 3-Record LP set (pictured). The Advent of Deception website describes what Fagan shares with his listeners: "Within Mr Fagan’s astonishing recording, he describes the One World Order enslavement that was launched two centuries ago by one Adam Weishaupt who was financed by The Rothchild Banking Family. Backed with documentary evidence, the Illuminati fomented all the wars during the last two hundred years and became the prime instrument to achieve the agenda of the New World Order." Mr. Fagan comprehended the threat long ago and his quote may prove haunting to rest of us: “No one will enter the New World Order unless he or she will make a pledge to worship Lucifer. No one will enter the New Age unless he will take a Luciferian Initiation.”