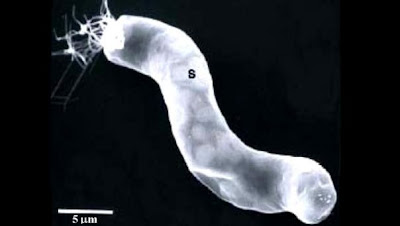 from digital trends: Aliens exist, and we have proof.

That astonishingly awesome claim comes from Dr. Richard B. Hoover, an astrobiologist at NASA’s Marshall Space Flight Center, who says he has found conclusive evidence of alien life - fossils of bacteria found in an extremely rare class of meteorite called CI1 carbonaceous chondrites. (There are only nine such meteorites on planet Earth.) Hoover’s findings were published late Friday night in the Journal of Cosmology, a peer-reviewed scientific journal.

“I interpret it as indicating that life is more broadly distributed than restricted strictly to the planet earth,” Hoover, who has spent more than 10 years studying meteorites around the world, told FoxNews.com in an interview. “This field of study has just barely been touched — because quite frankly, a great many scientist [sic] would say that this is impossible.”

Hoover discovered the fossils by breaking apart the CI1 meteorite, and analyzing the exposed rock with a scanning-electron microscope and a field emission electron-scanning microscope, which allowed him to detect any fossil remains. What he found were fossils of micro-organisms (pictured here), many of which he says are strikingly similar to those found on our own planet (pictured above).