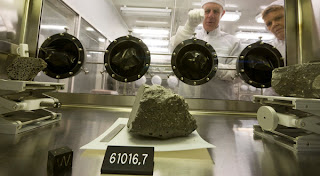 from nytimes: West Virginia lost one, until it turned up one June day on a bookshelf in the basement of a retired dentist. New York has one in a vault at a museum in Albany, but another one given to the state for safekeeping was not kept very safe, because it appears to be missing, though the attorney general’s office has started looking into the case. A long-lost one in Colorado resurfaced at the home of a former governor, and another one in Arkansas was found among former President Bill Clinton’s memorabilia. Somebody swiped one from a museum in the island country of Malta, and somebody else who got his hands on one in Honduras tried to sell it in Miami to an undercover federal agent.

All of these items were literally out of this world: moon rocks, meteorite samples and other so-called astromaterials that were lent to researchers by NASA or were offered as gifts to American and foreign leaders. Hundreds of moon rocks and other space objects have been lost, destroyed, stolen or remain unaccounted for, some of which American astronauts and presidents presented to dignitaries around the country and the world decades ago and others that NASA officials lent for education, research and public display. The objects survived in outer space for ages and include some of the first samples ever returned from another planetary body, but after just a few short years on Earth they met the same fate as a set of car keys or a 29-cent postcard.