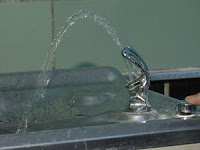 from rogue government: Fluoride was actually put in the water in Nazi concentration camps to ensure the Jews were submissive to authority. Now our loving government does the same to us selling the use of it as a way to keep our teeth healthy.

from wkyc: The City of Cleveland's water system is feeling the impact of a nationwide fluoride shortage.

Some water systems across the country have had to stop fluoridating water because they've been unable to buy it.

Fluoride is a trace chemical added to water to help strengthen and protect teeth.

Cleveland's supplies got down to the worry level earlier this year.

"We were down to a couple days. We don't like to get below a week or so," said Assistant Commissioner for Operations Rolfe Porter.

There are multiple reasons for the national shortage. Hurricane Katrina destroyed production facilities that are not yet rebuilt...

A Case Western Reserve professor who has done studies on Cleveland water says even if Cleveland stopped fluoridating temporarily, it wouldn't mean much.

"We're probably talking several months before there would be a significant impact," said James Lalumandier.

Too much fluoride can be harmful. The state requires it be added to water systems in a one part per million quantity.