nazi hatemonger bites the dust & 2 others plot to kill

from winter patriot: The right-wing Austrian politician Jörg Haider has been killed in a car crash. Too bad. Even though Haider was a Nazi sympathizer who was popular for his racist policies, his obituary (written by Matt Schudel) in the Washington Post tries hard to portray him as a respectable and successful figure, even while mentioning a few of his career low-lights. This tells you everything you need to know about the Washington Post...

[Update: Apparently I am in the minority ... of something or other! You can read some differing views here, courtesy of Kenny's Sideshow... and there's more here at Winter Patriot dot com, courtesy of McJ.] 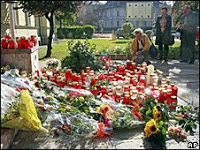 from bbc: Austrian far-right politician Joerg Haider was driving at twice the speed limit when he died in a crash early on Saturday, court officials have said. Mr Haider, 58, was travelling alone at 142km/h (88mph) in a 70km/h zone when his Volkswagen Phaeton V6 crashed. The accident occurred south of Klagenfurt, the capital of Carinthia, where he was the provincial governor. He was leader of the Alliance for Austria's Future, and was known for his anti-immigration and anti-EU policies. Mr Haider had crashed shortly after leaving a nightclub. However, prosecutor Gottfried Kranza would not say whether Mr Haider's body had tested positive for alcohol.

update: austrian officials fear neo-nazi 'pilgrimage' for haider's funeral
from scotsman: Austrian officials are hoping the family of far-right extremist Joerg Haider will hold a private funeral to prevent neo-Nazis turning any public burial into a pilgrimage of hate. Vienna has announced that public buildings in the capital will be draped in black flags when the body of Mr Haider, 58, is interred. However, yesterday it was still unclear whether national government representatives would be attending any funeral or remembrance service for Mr Haider, who died in a car crash early on Saturday morning. Mr Haider courted controversy by praising aspects of the Third Reich and was a hero of ultra-rightists across Europe.

update2: nazi symp haider had his last drink in a gay bar
from scotsman: The funeral takes place of the Austrian far-right leader Jörg Haider today amid revelations over a private life that could have destroyed his public comeback. Not only did the Austrian extremist die with three times the legal drink-drive alcohol limit in his blood, but he had his final drinks in a gay bar. He was dogged by allegations throughout his career that he was a closet homosexual and it has now been revealed that he spent the last part of his last night drinking in a gay club, Stadtkrämer. Although seemingly happily married with two daughters, affluent – his salary as governor of the province of Carinthia was more than £13,000 a month – and poised once more to become a power broker after success for his party in Austria's recent general election, Mr Haider seemed to have the self-destruct gene that has laid politicians low in many countries.

from queerty: The truth comes out! Twenty-seven year old Austrian politician Stefan Petzner admitted this week to having a long-term affair with his recently deceased boss, Jörg Haider... Though it's long been rumored, the murmurs of Haider's homo ways were revived last week after photographers spotted him at a gay bar just minutes before he was involved in a fatal car crash. Taking Haider's spot as leader of the ultra-right Alliance for the Future of Austria this week, Petzner told a radio host that he and Haider began their relationship a few years ago, but promises that Haider's wife knew about their goings on - and didn't give a hoot... Other sources claim, however, that Mrs. Haider hated that the men spent so much time together. Meanwhile, Alliance leaders have canceled Petzner's planned interviews in hopes that the scandal will blow over, a prospect that's looking less and less likely.

2 nazis convicted in plot to kill deputy
from ap: Two officers of the white supremacist Aryan Brotherhood of Texas have been convicted of conspiracy to murder a former Otero County sheriff's deputy and distribute methamphetamine. Prosecutors alleged Robert Guyton "Krusty" Cook and Samuel Zachary Arrington were involved in arranging meetings to set up a revenge hit on former Deputy Billy Anders because he'd killed an Aryan Brotherhood leader near Cloudcroft in December 2004. Jurors convicted the pair Tuesday but hung on charges against a third Aryan Brotherhood member, James Curtis Thompson, one of the group's five top generals.