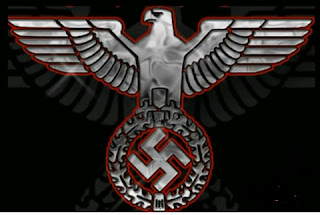 You can make it a Nazi UFO movie weekend with Nazi UFO Conspiracy and The Aldebaran Mystery. The first film, a well done survey of Nazi high tech, introduces viewer to great inventors of the Third Reich. Werhner von Braun may already be a familiar name as an early rocket scientist. Nazi UFOs goes further with obscure but important names: Jet pioneer Hans von Ohain, Victor Schauberger, Alexander Lippisch and the Horton brothers. A brief history of American UFOs begins with 1947 sightings at Maury Island and by Kenneth Arnold three days later, also, in Washington state to be followed just a few weeks later by the Roswell case. The 1965 Kecksburg, PA “acorn” UFO recovery by the military and its similarity to “Die Glocke“ (the Bell) is discussed. The film suggests Nazi UFOs may be result of a search to solve oil dependency and find an aircraft capable of take off without a 800 ft runway. Igor Witkowski, Jerry E Smith and Bill Sweetman participate in film. The best Nazi mystery, left for last, is disappearance of Hans Kammler, who departed in a six engine Junkers 390 in April 1945 and never seen again.

The Aldebaran Mystery is a collection of legends by Jim Nichols of UFOTV.com. Aldebaran is a star 65 light years away in Constellation Taurus, Vril Society psychics Maria Orsic and Sigrun communicated through telepathy with inhabitants in the planetary system there. The extraterrestrials directed instructions to the psychics through automatic writing to build a spacecraft. German secret societies influence went to the very top with rumor the Fuhrer consulted on an attempted space flight through a wormhole to Aldebaran in 1945. Nazi UFO myths are alive and very entertaining.