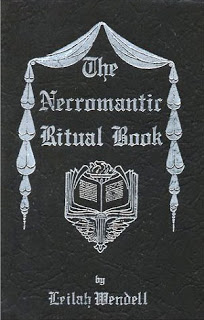 Humor can be seen in an 18-year old's cross-country quest to get some nookie as portrayed, this week, in The Oregon Commentator, "Did it all for the Nookie". The young man is easily forgiven over the grown men on TV series, "To Catch a Predator," where many traveled long distances only to get busted! Humor aside, it's worth a look at current literature associated with satanic rituals.  The description at Leilah Wendell's Westgate Publications website of her 1991 book, "The Necromantic Ritual Book", includes "for many, ritual is a way to formally connect with specific currents of energy. The rituals in this book are intended to align one's soul with the "Death Energy". One might ask, what is "Death Energy"? Simply expressed, it is the current of transition. The workings in this unique book will permit the magician to bask in the "lifeforce" of the Angel of Death. Successful working of any of these devotions will enable you to share consciousness with the Angel of Death on an intimate level, as well as becoming "one" with your own death."

Katherine Ramsland writes in a TruTV article, Wendell attempts to make a distinction between necromancy and necrophilia.  Ramsland writes later in an apparent contradiction, "Wendell is fully absorbed in her devotion to "death energy." She believes that necrophilia has been unfairly vilified and she wants people to understand what it means to love Death. It's a preference, not a compulsion, and it's a way through which one can seek to achieve emotional and spiritual intimacy with death."

Wendell has been a funeral director and morgue assistant, "...and her primary interest had been in disinterring bodies for reburial—a passion she shared with a friend, John. Together they were called 'the Resurrectionists.'...One night John pulled up to her home and pulled out a large package wrapped in a red bow. Carrying it in and placing it on her carpet inside, he urged her to unwrap it. She did, and before her lay a desiccated corpse, remarkably preserved. It had been exhumed from a pauper's cemetery and its disposition was pending... John told Wendell she could have it all to herself for four days. Immediately, she made a death mask for a memento. Then she took the corpse to bed. To her mind, this was the greatest gift that anyone had ever given her."

Readers should keep in mind it's a preference not a compulsion and should not discriminate. Necromancy deserves our respect?  New Orleans is below sea level and graves are above ground, which seemed ideal for Wendell.  Wendell no longer resides in New Orleans and must miss it dearly! Wow!