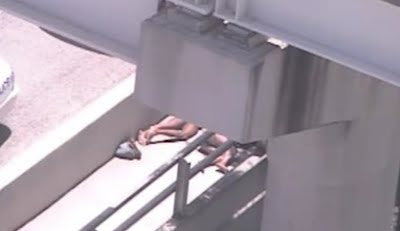 from brasschecktv.com: The long-dreaded "zombie apocalypse" may already be underway in Miami, where a human zombie - a mindless naked man - was encountered by police officers who found him literally feasting on the face of another naked man. This is a true event and has been reported by CBS Miami which says: "Miami police shot and killed a man on the MacArthur Causeway Saturday afternoon, and police sources told CBS4 they had no choice: the naked man they shot was trying to chew the face off another naked man, and refused to obey police orders to stop his grisly meal...Officers found one man gnawing on the face of another, in what one police source called the most gruesome thing he'd ever seen."