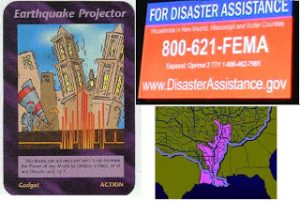 The National Level Exercise 2011, formerly Top Officials (TOPOFF), runs this week and a source of much hand wringing! The FEMA website provides a brief overview. “NLE 2011 will simulate the catastrophic nature of a major earthquake in the central United States region of the New Madrid Seismic Zone (NMSZ). The year 2011 is the bicentennial anniversary of the 1811 New Madrid earthquake, for which the NMSZ is named. NLE 2011 will be the first NLE to simulate a natural hazard.” Is it natural?

George Ure, in an article, “New Madrid Fault: Man-Made Flooding & Earthquakes,” poses concern about largely overlooked ruling to allow blowing of Birds Point levee to save Cairo, IL. The Army Corps of Engineers blew the levee on May 3rd that resulted in flooding of 130,000 acres of Missouri farmland. Ure observes this is right over the fault zone and asks, “can the weight of water outside of traditional courses create a quake?” Ure doesn’t overlook secret society ties, by noting the ruling Judge Steven Limbaugh, Jr., is a cousin of the radio personality. “Why, I’d even be looking for occult messages in the timing of the explosion, too, as long as we’re wandering down conspiracy lane…”

Ure reports, also, weather warfare (HAARP) and isn’t the only one. Dutchsinse, a brilliant observer, reports on radar rings and scalar squares in the run up to NLE 2011 in the Central US. A linked Wisconsin exercise, Vigilant Guard 2011, includes “…cyberattacks, chemical spills, flooding, a ship with a bomb and sending aid to Indiana in response to earthquake along New Madrid faultline,” reports Dutchsinse in another video. Dutchsinse sees same danger as Ure, the immense weight of floodwaters adding pressure on fault.

How many coincidences are too many? There are extreme opinions on the New Madrid fault in cyberspace. We’re not told the truth about the fault’s true length which is much longer. Other opinions tie in the 2010 BP Oil Event Horizon drilling disaster as possibly another contributor? Finally, the prophetic see the coming split of the country up the Mississippi to the Great Lakes, a la, Edgar Cayce’s 1941 prophetic reading! It’s troublesome few consider possibility a drill may go live and a full scale event set into motion! The agencies in charge do not add to a comfortable feeling! HAARP and the levee seem to have failed to elicit a jolt, maybe, we’ll get through the week?