new spurlock documentary is ‘the greatest movie ever sold’

financing the hand that slaps (or nibbles) you 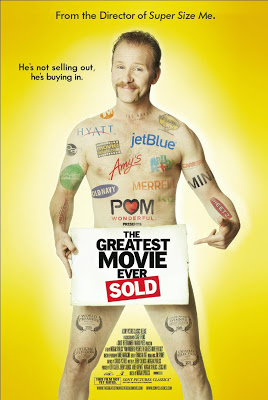 from popcandy: I’m eager to see The Greatest Movie Ever Sold, Morgan Spurlock’s new documentary about product placement, marketing and advertising. In case you haven’t heard, Spurlock financed the film entirely by product placement – something he discusses in his recent TED talk, which went online today. (The full official title for the movie is POM Wonderful Presents: The Greatest Movie Ever Sold. Heck, he even sold the naming rights to his TED talk!) “I’ve put myself in some horrible situations over the years, but nothing could prepare me … for anything as difficult or as dangerous as going into the rooms with (advertising agencies),” Spurlock says, before adding that none of the bigwigs wanted anything to do with his film.

video update: ok go ‘the greatest song i ever heard’

[editor’s note: morgan spurlock & i were born in the same county in west virginia; needless to say, i feel an affinity for him. sure there are other actors & musicians that hail from my home state, but i don’t admire their art like i do spurlock’s. now, here comes the big ‘however’: a quick dig through spurlock’s websites will show that he’s gotten into bed with some unsavory characters such as the ‘clinton global initiative‘, with all its rockefeller foundation & globalist connections. a tweet from february praises sony studio chief michael lynton, a creature from the cfr & rand corp. even the title rights to morgan’s recent ted talk were bought by emc, a ‘software’ company whose dirty details were exposed by a whistleblower. so, no, as i brace myself for the backlash against my coverage of spurlock on the recent episode of ‘new world next week‘, i don’t have blind allegiance to this guy. i have been actively trying to contact him for an interview where i would bring up some of these questions. just setting the record straight, thanks.]