a new view of stuxnet role in fukushima disaster 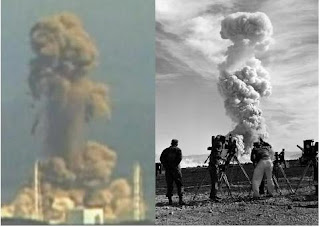 Freelance journalist Jim Stone has recently uncovered new information and blows the lid off Fukushima "natural" disaster! In an appropriately titled article by Stone, "Did Dimona Dozen Murder Fukushima 50," simply deconstructs tragedy with a step by step progression of events that have ring of truth! A crucial turn was when Japan offered to enrich uranium for Iran. "Immediately, Israel sets up front companies masquerading as security companies, and one of them succeeds in getting a security contract at a Japanese nuclear facility. 4 months later the Dimona Dozen shows up, and under the cover of a security contract gets unlimited access to the heart of Fukushima. They plant the virus, install real cameras outside the facility, and functional poorly disguised nuke cameras inside the facility. In addition to this, they install an unauthorized data connection to allow control of all the guts of the facility via the virus."

The alleged operation is a movie script comparable to 9/11, a tactical nuke set off in the Japan trench the cause of the tsunami. Stone draws attention to photos and overlooked by others: there is little quake damage as the tsunami arrives on coast. Further, there is little panic as would be expected from a 8.9 quake on the Richter scale. The freelance journalist found US Geological Survey (USGS) documents, showing quake to be a 6.67 and more consistent with what is on many amateur videos taken that day. People would not be able to ride out a huge quake as many do on the videos, believes Stone. The Japanese seem unaware of a huge quake and pictures show old concrete structures intact as the tsunami inundates them. Israel simply waited for a natural event in the quake-ridden country to provide cover for their tactical nuke, according to Stone.

A few days later, a second detonation takes place (pictured) inside reactor 3, which had been equipped with huge security cameras with a striking resemblance to a nuclear device by the Israeli security firm..  This was accomplished by an unauthorized datalink via the Stuxnet virus admitted to by Israel.  It's believed all the redundant back up systems failed at the nuclear plant because of Stuxnet. In similar manner to how Iran's Bushehr centrifuges were damaged, Stuxnet took over Siemens SCADA software to send commands that eventually damage equipment while bogus normal readings sent to controls.  Dr Brooks Agnew reveals on X-Squared Radio a controlling stake in Siemens was acquired by Israeli corporate interests, some time before 3-11. Was this the fact that spurred Germany's Merkel to shut down older reactors and to begin a move away from nuclear power?

The most colorful aspect of the alleged operation, is, "Israeli Prime Minister calls Japan, and says TAKE THAT for offering help to Iran, and ya know, there are FIVE MORE NUKES in the ocean off the coast of Japan, and we are going to set those off and destroy your coastal cities if you do not forget that 6.67, and say it was a 9 to cover for tsunami effects. AND NOW we are going to make your people DEMAND you move away from nuclear power so you can NEVER threaten us like that again. We are BLOWING UP FUKUSHIMA DIIACHI and you are going to go along with whatever story we tell you to. SO THERE!!"

Jim Stone provides a theory that fits the facts, which doesn't make it accurate. It should remind everyone to question the official story as it clearly does not add up! Stuxnet insured reactor meltdown but still took a nuclear device to blow up the evidence not just a nuclear reaction. The present writer believes Japanese government must be operating under duress to allow radiation leak at Fukushima to continue without more dramatic efforts to mitigate crisis! A very readable version of Stone's account is available at NaturalNews.com. A recent Rumor News Mill interview of freelance journalist Jim Stone is available here.