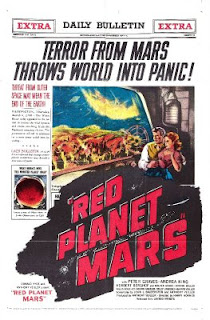 On the precipice of 2012, the year will live up to some prediction simply due to number thrown at us! James Evan Pilato, Mediamonarchy.com host, relates belief in weekly episode 245, the coming year will see further ramping up of Project Blue Beam faked alien invasion propaganda. Cyber/spacewar posts document odd trend of formalization of alien contact, "united nations 'to appoint space ambassador to greet alien visitors'" and "earth must prepare for close encounter with aliens." What would really happen if alien contact were made? Would it be an Orson Welles inspired panic as in 1938's "War of the Worlds"? The 1952 Film "Red Planet Mars" starring a youthful Peter Graves, presents surreal resemblance to our present situation! Or, does movie imply how long the agenda has been with us? Wikipedia entry relates plot summary after alien contact publicly announced:

"This knowledge [of alien contact] leads to political and economic chaos, especially in the West. The American government imposes a news blackout after the first four messages, only to reveal many messages later that Earth's people can be saved if they return to the worship of God. Revolution sweeps the globe, including the Soviet Union. But there remains doubt about the messages being genuine, as an ex-Nazi who developed the original communication device prototype prepares to announce that he has been duping the Americans with false messages from a secret Soviet-funded radio transmitter high in the Andes mountains of South America. The mystery thickens as it appears the messages may have continued even after the secret transmitter was destroyed in an avalanche."

The movie can be panned as a Red Menace propaganda movie with message return to God and Christianity and the Red Scare can be defeated! Red Planet Mars is eerily fascinating and the plot superior to today's formula Hollywood films, admission is free!