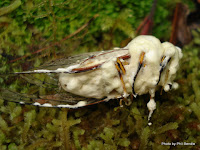 from cryptogon.com: Via: New Zealand Herald:

The Government is investigating a potential outbreak of genetically modified fungus at Lincoln University.

Two secured laboratories and a greenhouse have been locked down as the Ministry for Primary Industries (MPI) checks the biological scare.

Lincoln University researchers informed MPI and the Environmental Protection Agency on March 7 that it had evidence to suggest a fungus (Beauveria bassiana) supplied for research was potentially a strain modified genetically to include a marker so it could be traced in plants.

The fungus had been believed to have been a “wild strain” that is already present in the environment and so was being researched outside approved genetically modified (GM) containment facilities.

Work undertaken by the researchers indicated that the fungus had already been genetically modified.

Related: Infections With ‘Nightmare Bacteria’ Are On The Rise In U.S. Hospitals