from ap/my way: In a day of ceremony and historic change, Rep. Nancy Pelosi became the nation's first female House speaker on Thursday as Democrats eagerly took control of Congress for the final two years of President Bush's term.

"The Democrats are back," rejoiced Pelosi, and she immediately set the rank-and-file to work passing tougher ethics rules.

NORAD identified the rocket as an SL-4 that had been used to launch a French space telescope in December, and Kelly said U.S. spacewatchers knew the rocket was coming down. 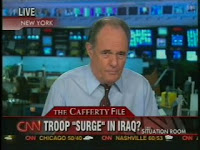 from crooks & liars: In [Wednesday] night's 7:00 question, Jack cut through the "surge" spin (aka the McCain Doctrine) and muses aloud about when the insanity will end...

"President Bush is expected to call for sending as many as 40,000 additional troops to Vietnam — I mean Iraq — next week. Escalating the war is now being called a surge. Stay the course has been relabeled. It's the new way forward. We did this in Vietnam, remember? The U.S. kept sending troops over there which only led to more people dying."

from kurt nimmo: In an all too predictable game of musical chairs, the Bush neocons have decided to shuffle John Negroponte, the butcher of Honduras and member in good standing at the Council on Foreign Relations, off to the State Department to work under Condi, drop Zalmay Khalilzad, the PNAC flunky, into fill the space vacated by the unconfirmable John Bolton at the United Nations, and spin former admiral Mike McConnell, a director at Booz Allen Hamilton, where the neocon “World War Four” James Woolsey runs shop, into the top spook position as national intelligence director.

The President asserted his new authority when he signed a postal reform bill into law on Dec. 20. Bush then issued a "signing statement" that declared his right to open people's mail under emergency conditions.

That claim is contrary to existing law and contradicted the bill he had just signed, say experts who have reviewed it.