Ten Canadians die after taking bird flu vaccine
from world poultry: Following reports that patients taking Tamiflu can exhibit dangerous behaviour, news has surfaced that ten Canadians have died and at least 74 had adverse reactions after taking the flu drug. Health Canada has been criticised for not issuing a public update about the drug sooner.

Judge strikes down part of Bush anti-terror order
from washington post: A federal judge in Los Angeles, who previously struck down sections of the Patriot Act, has ruled that provisions of an anti-terrorism order issued by President George W. Bush after September 11 are unconstitutional. 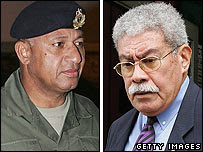 Military takes hard line in the face of dissent
from the australian: Fiji’s military rulers are cracking down on dissent, making house calls on those who dare criticise the new regime. Only a night after their illegal takeover last Tuesday, the army was flexing its muscles – well before yesterday’s declaration it would interrogate anyone suspected of inciting opposition to the new regime.

Ex-Agent: CIA Seed Money Helped Launch Google
from prison planet: An ex-CIA agent has gone further than ever before in detailing Google’s relationship with the Central Intelligence Agency, claiming sources told him that CIA seed money helped get the company off the ground and naming for the first time Google’s CIA point man. Listen to the interview with Robert David Steele, in which he also questions the official version of 9/11, by clicking here

FBI taps cell phone mic as eavesdropping tool
from cnet news: The FBI appears to have begun using a novel form of electronic surveillance in criminal investigations: remotely activating a mobile phone’s microphone and using it to eavesdrop on nearby conversations. The technique is called a “roving bug” …

Military radio signal jams garage doors
from ap/yahoo: What do remote-control garage door openers have to do with national security? A secretive Air Force facility in Colorado Springs tested a radio frequency this past week that it would use to communicate with first responders in the event of a homeland security threat. But the frequency also controls an estimated 50 million garage door openers, and hundreds of residents in the area found that theirs had suddenly stopped working.

Look who owns US debt now 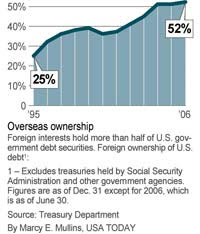 Other nations hold a record 52% of it, leaving U.S. economy vulnerable.
from usa today: For most of U.S. history, the national debt was something that America owed itself. What was borrowed by the government was lent by its people. The liabilities of one were the assets of the other.

But that has changed as the federal government has increasingly looked abroad to finance its prodigious borrowing. Foreigners now hold a record 52% of the government’s $4 trillion in outside debt, up from a quarter in 1995.

Corruption, crime inside Homeland Security
from homeland stupidity: Buried in what would otherwise have been a dry summary of financial audits and inspections, the Department of Homeland Security Inspector General’s semiannual report to Congress also contains dozens of reports of misconduct and criminal activity perpetrated by DHS employees themselves.

GOP activist held in sex-predator sting
from seattle times: Larry Corrigan, a well-known activist in local Republican politics as a backer of U.S. Rep. Dave Reichert and King County Prosecuting Attorney Norm Maleng, was arrested Wednesday in an Internet sting for allegedly trying to arrange sex with a 13-year-old girl.