estimate says iran nuke program stopped in 2003
from iht: A new U.S. intelligence report concludes that Iran's nuclear weapons development program has been halted since the fall of 2003 because of international pressure - a stark contrast to the conclusions U.S. spy agencies drew just two years ago.

'doomsday seed vault' in the arctic
from global research: Bill Gates, Rockefeller and the GMO giants know something we don’t? ... So when Bill Gates decides through the Gates Foundation to invest some $30 million of their hard earned money in a project, it is worth looking at. No project is more interesting at the moment than a curious project in one of the world’s most remote spots, Svalbard. Bill Gates is investing millions in a seed bank on the Barents Sea near the Arctic Ocean, some 1,100 kilometers from the North Pole. Svalbard is a barren piece of rock claimed by Norway and ceded in 1925 by international treaty.
flashback: 'doomsday' vault design unveiled

grocery chain bans high-fructose corn syrup
from seattle post-intelligencer: There are no Wheat Thins at PCC Natural Markets, no boxes of Kellogg's Raisin Bran, not even any Sara Lee whole grain bagels or Oroweat cracked-wheat hot dog buns. What customers will find is almost unheard of: a supermarket free of products containing high-fructose corn syrup. After years of winnowing out the ubiquitous sweetener, the eight-store natural foods co-op announced this week that the rout was complete... "The next frontier is here," said Bob Vosburgh, health and wellness editor for the trade publication Supermarket News, who called PCC an industry leader in such controversial topics. PCC apparently is the second significant organization nationally to take on the issue.

from ap: With government officials, scientists and courts in a continuing debate over which deaths can be linked to the trade center dust, Chief Medical Examiner Charles Hirsch has so far drawn the most narrow definition as he considers requests to reclassify several respiratory deaths as homicides.

"All persons killed at the World Trade Center on Sept. 11, 2001, and others who died later from complications of injury or exposure directly caused by the collapse of the twin towers on that day are homicide victims," Hirsch wrote in a letter made public last week that denied a request to call the 44-year-old Godbee a homicide victim. "Mr. Godbee's manner of death will remain 'natural.'"

For Hirsch to consider ruling as a homicide the death of a person exposed to trade center dust, "they had to be there at the time of attack, up to and including when the towers came down and the dust form settled," said spokeswoman Ellen Borakove.

sarkozy to algeria under cloud of 'jewish lobby' row 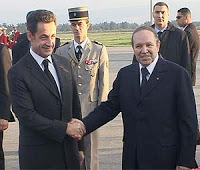 from afp: French President Nicolas Sarkozy heads Monday to Algeria to put the seal on multi-billion-euro oil and gas contracts, amid a row over remarks by an Algerian minister about alleged ties to the "Jewish lobby"... Abdelaziz Bouteflika firmly disowned comments by his veterans minister last week that Sarkozy owed his election to the "Jewish lobby", citing in particular Foreign Minister Bernard Kouchner, who is half-Jewish. Sarkozy's maternal grandfather was Jewish.