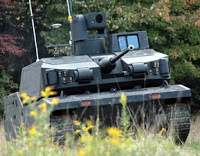 from wired: We now know that there are robotic cars smart enough to drive themselves around a city. The next step: give those vehicles automatic weapons, of course... Last month, a set of South African remotely-operated 35 mm guns spun out of control, and killed nine soldiers. The Black Knight basically operates under the same principles - taking that South African weapon, and making it mobile. And radio-operated. What could go possibly wrong?

from canadian press: The Canadian dollar's meteoric rise accelerated this week, rising two cents in less than 24 hours. The loonie broke through the US$1.10 barrier in overseas trading Wednesday, initially hitting the 110.02 cents US mark. It dropped back down to 109.6 cents US, before taking off again and landing well above US$1.10. This comes on the heels of Tuesday's rise of 1.34 cents US and modern-era record close of 108.52 cents US. Analysts say it doesn't appear that the loonie will be returning to earth anytime soon.

a war pitched with a 'curve ball' 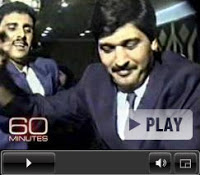 from jim wallis: Watch 60 Minutes from Sunday night or read the story. It revealed the results of a two-year investigation into the source of the key piece of information which was used by the Bush administration as "proof" that Saddam Hussein had weapons of mass destruction...

The source, ironically code-named "Curve Ball,"was a young Iraqi defector in Germany, who claimed he was a top student employed by a so-called seed purification plant that was really a bio/chemical weapons facility, and that he saw trucks moving in and out to be armed with the weapons of mass destruction. Problem is that he wasn't, after all, a "top student," wasn't there during the time he reported, got caught stealing equipment from his next employer, and there turned out to be walls at the alleged entrances and exits where the trucks were supposed to be going in and out. 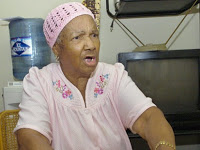 from ny times: Chicago's Police Department is investigating an officer's use of a Taser last month on an 82-year-old woman who police say was swinging a hammer when they arrived. Lillian Fletcher was rushed to the hospital after being jolted by the Taser last week but has been released, police said Tuesday... The human rights group Amnesty International USA has voiced concerns that police departments are starting to use Tasers more routinely rather than in cases of serious danger. 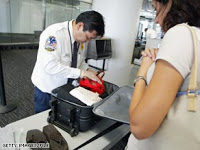 from mark talk: You know those “tests” of airport security, the ones where “undercover agents” posing as terrorists try to smuggle bombs, bomb parts and other weapons onto aircraft? And you are aware that in the most recent tests agents were able to walk through airport security carrying nuclear materials 75% of the time.

That number becomes even more shocking when you learn that Mike Restovich, assistant administrator of TSA’s Office of Security Operations, apparently sends out email warnings to screeners in advance. These warnings even include the physical description of the “undercover agents” and what to look for - and Mister MaGoo at the check point there STILL couldn’t Sherlock his way to figuring it out!!