from ap: American laboratories handling the world's deadliest germs & toxins have experienced more than 100 accidents and missing shipments since 2003, and the number is increasing steadily as more labs across the country are approved to do the work.

american lockdown: law enforcement
out of control & beyond the pale 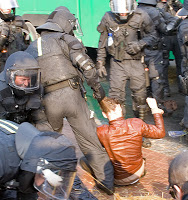 from carolyn baker: All of these stories are connected by a common thread: Law enforcement in the United States, whose duty it is to "protect and serve" have now become not just part of the problem but in fact, predatory devourers of those they are sworn to keep safe.

Deepening collapse will be attended by manifestations of the unraveling of all institutions, one of the most frightening examples being law enforcement's hysterical repression of citizens. 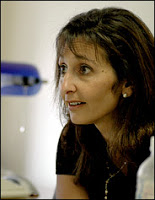 from washington post: A small private intelligence company that monitors Islamic terrorist groups obtained a new Osama bin Laden video ahead of its official release last month, and around 10 a.m. on Sept. 7, it notified the Bush administration of its secret acquisition. It gave two senior officials access on the condition that the officials not reveal they had it until the al-Qaeda release.

Within 20 minutes, a range of intelligence agencies had begun downloading it from the company's Web site. By midafternoon that day, the video and a transcript of its audio track had been leaked from within the Bush administration to cable television news and broadcast worldwide.

from paul joseph watson: Former CIA case officer Marc Sageman says the membership of "Al-Qaeda" has dwindled to a paltry two dozen people, and its leadership is completely cut off from the mostly "petty criminals and gang members" that are now the target of the war on terror. Such a sweeping denouncement of the strength of Al-Qaeda is at odds with the constantly hyped threat of the terror network by media outlets and government.

"Dr Sageman said al-Qaeda's leaders had been all but cut off from the current crop of jihadists and comprised no more than two dozen people. The threat was now coming from home-grown young men in their early 20s who recruited mostly on the internet," reports news.com.au.

9/11 explains the impotence of antiwar movement

from paul craig roberts: The anti-war movement has proven impotent to stop the war in Iraq despite the fact that the war was initiated on the basis of lies and deception. The anti-war movement stands helpless to prevent President Bush from attacking Iran or any other country that he might demonize for harboring a future 9/11 threat.

September 11 enabled Bush to take America to war and to keep America at war even though the government’s explanation of the events of September 11 is mired in controversy and disbelieved by a large percentage of the population.