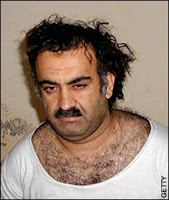 from 9/11 blogger/telegraph: Hearings begin today at Guantanamo Bay for a group of 14 terrorist suspects including Khalid Sheikh Mohammed, the alleged September 11 mastermind. No lawyers or reporters will be present at the hearings so the only account of the outcome will come from the US military... A Pentagon spokesman said the hearings were closed to prevent classified information from leaking.

the scandal at walter reed

from ron paul's statement on the iraq war resolution before the US house of representatives march 7, 2007: "The scandal at Walter Reed is not an isolated incident. It is directly related to our foreign policy of interventionism..."
Watch Ron Paul's speech on video.

bugging out on homeland security 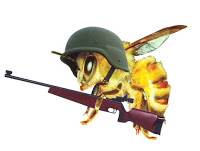 from popsci: Annoying as they are, you may want to think twice before you crush a cockroach or swat a fly — you could be killing a future foot soldier in the war on terror. Increasingly, scientists are turning to insects and other creatures for better ways to identify biohazards.

from post chronicle: A Eurovision Song Contest official is attempting to block Israel's entry to this year's competition - because he feels the song is inappropriate.

Israeli pop band Teapacks has recorded Push The Button in Hebrew, English and French, and hope to wow Eurovision panellists in May. 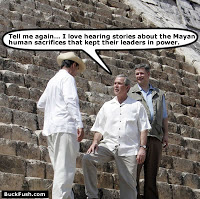 from sfgate: Mayan priests will purify a sacred archaeological site to eliminate "bad spirits" after President Bush visits next week, an official with close ties to the group said Thursday.

"That a person like (Bush), with the persecution of our migrant brothers in the United States, with the wars he has provoked, is going to walk in our sacred lands, is an offense for the Mayan people and their culture," Juan Tiney, the director of a Mayan nongovernmental organization with close ties to Mayan religious and political leaders, said Thursday.