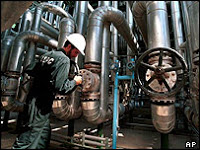 from afp: US oil services giant Halliburton said Monday it had wrapped up its work commitments in Iran and was no longer conducting any projects in the Islamic republic...Halliburton announced last month that it was relocating to the United Arab Emirates to capitalize on the Gulf region's booming energy market.

bush almost blows himself up

from crooks & liars/detroit news: Not for nothing, President Bush and Dick Cheney have to despise alternative energy. They made (and continue to make) fortunes from oil and must see this as a direct threat to their livelihoods. And now that a hybrid almost killed the President, it must make it even worse.
UPDATE from reuters: Mulally is no longer laughing about his suggestion that he saved President Bush's life... White House spokeswoman Dana Perino said, "The story wasn't accurate, and I'll just decline to comment further."

drug-dispensing tooth controlled by cell phone
from local6/live leak: Researchers in Europe and Israel are working on a tooth that can dispense medicine into a person's mouth, according to a Local 6 report. The tiny device would be able to release a specific amount of medicine at certain intervals, ensuring that the patient gets the proper dosage at the right time. It's attached to your existing teeth and could one day be controlled by using your cell phone, the report said.

country songwriter comes out for 9/11 truth
from 9/11 blogger/patriots question 9/11: Dan Tyler's songs have become hits for LeAnn Rimes, Kenny Rogers, The Oak Ridge Boys, Eddie Arnold, B.J. Thomas, Eddie Rabbit, The Nitty Gritty Dirt Band... "millions of patriotic Americans question the official explanation of the attacks. The questions and the number of citizens asking them will increase until a tipping point is reached and a new, aggressive investigation initiated..."

from govtech: The U.S. government's growing appetite for biometrics-based ID systems to bolster security, detect terrorists, fight crime and control illegal immigration is generating billions of dollars in opportunities for an evolving industry that's coming of age in the post-Sept. 11 era. The growth of the identification industry also has spawned an aggressive push-back from privacy advocates against what they call an emerging "industrial surveillance complex."

secrets of the freemasons
from national geographic/google video: It is a secret society that has shaped world events for more than 1,000 years. Members have been found everywhere from the World Bank to the United Nations to the Pentagon to top ranks of major corporations. They have been accused of controlling the money supply through the Federal Reserve and throughout history they have been present everywhere from the Boston Tea Party to the French Revolution. They are the Freemasons. But who exactly are they?