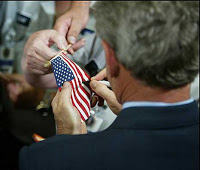 it's bush vs america - and bush wins

from jerusalem post: What's going on in Washington now is unbelievable - Bush is getting away with it... Nobody's stopping him, nobody's going to... You watch these clowns in Congress, these eunuchs who don't have the balls to even pass what a Bush ally laughed off as a "confetti resolution"

wolfowitz warned of 'surprise like pearl harbor'
from jones report: Video posted recently on Live Leak shows now World Bank President Paul Wolfowitz delivering a June 2001 West Point commencement speech wherein he focused on surprise attacks -- making heavy reference to Pearl Harbor... "Be prepared to be surprised. Have courage... You are about to embark on a great crusade."

things that go bump in the night and start wars
from kurt nimmo: “Unitl very recently,” [Jim] Webb states, “we never operated aircraft carriers in the Persian Gulf, because number one the turning radius is pretty close, and number two, the chance of accidently bumping into something that would start a diplomatic situation is pretty high.” But then, of course, this sort of “accident” is precisely what the neocons are fishing for in order to start Phase II, Iran Attack.

an explosion of disbelief
from this is london: The official story of what happened on 9/11 never fails to shock... Yet today, more than five years on, this accepted version of what happened on 9/11 is being challenged... A recent poll by the respected New York Times revealed that three out of four Americans now suspect the U.S. government of not telling the truth about 9/11.