from ap/yahoo: The Pentagon has abandoned its limit on the time a citizen-soldier can be required to serve on active duty, officials said Thursday, a major change that reflects an Army stretched thin by longer-than-expected combat in Iraq.

The day after President Bush announced his plan for a deeper U.S. military commitment in Iraq, Gen. Peter Pace, chairman of the Joint Chiefs of Staff, told reporters the change in reserve policy would have been made anyway because active-duty troops already were getting too little time between their combat tours.

britain working "hand in glove" with US over iraq
from german press agency/raw story: The British government Thursday welcomed the decision by US President George W Bush to send more troops to Iraq but said the government in London had no plans to increase current troop levels of around 7,200. A spokesman for Prime Minister Tony Blair, asked after a cabinet meeting whether the British leader specifically backed the US decision, said the UK was "working hand in glove" with its coalition partners and the Iraqi government in the conflict. 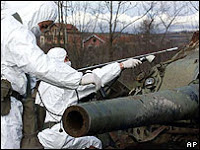 from bbc: Italian soldiers are still dying following exposure to depleted uranium in the wars in Bosnia and Kosovo, their relatives say.

Troops who served during the wars in the 1990s believe they have contracted cancer and other serious illnesses from extended exposure to the munitions.

The US says it fired around 40,000 depleted uranium rounds during the Bosnian and Kosovo conflicts.

cia gets the go-ahead to take on hizbollah
from telegraph: The Central Intelligence Agency has been authorised to take covert action against Hizbollah as part of a secret plan by President George W. Bush to help the Lebanese government prevent the spread of Iranian influence. Senators and congressmen have been briefed on the classified "non-lethal presidential finding" that allows the CIA to provide financial and logistical support to the prime minister, Fouad Siniora...

It authorises the CIA and other US intelligence agencies to fund anti-Hizbollah groups in Lebanon and pay for activists who support the Siniora government. The secrecy of the finding means that US involvement in the activities is officially deniable.

from cbc: Canadian coins containing tiny transmitters have mysteriously turned up in the pockets of at least three American contractors who visited Canada, says a branch of the U.S. Department of Defence.

Security experts believe the miniature devices could be used to track the movements of defence industry personnel dealing in sensitive military technology.