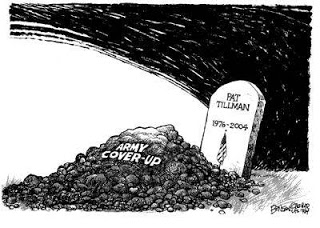 no evidence of enemy fire in tillman death

from ap: Army medical examiners were suspicious about the close proximity of the three bullet holes in Pat Tillman's forehead and tried without success to get authorities to investigate whether the former NFL player's death amounted to a crime, according to documents obtained by The Associated Press... No evidence at all of enemy fire was found at the scene — no one was hit by enemy fire, nor was any government equipment struck.

from nytimes: Feel guilty about fueling up that gas guzzler or buying that box of incandescent bulbs? Would you feel better if, instead of frequent flier miles or cash, your credit card’s rewards program allowed you to offset your role in global warming? General Electric is betting you will... Environmentalists are not quite as sure. “It’s ironic,” said Michael J. Brune, executive director for the Rainforest Action Network. “G.E. supplies parts for coal-fired plants, so its credit card offsets emissions it helps create.” 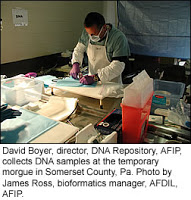 from newsday: The city medical examiner has identified the remains of one more of The Missing - the more than 1,100 people who died at the World Trade Center on Sept. 11, 2001, but whose bodies were never found. The medical examiner Tuesday announced that the remains of Edward Ryan, 42, of Scarsdale, who died at the World Trade Center, were identified by after DNA testing on remains found in a Con Edison manhole at Ground Zero in October. 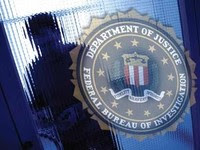 from abc: The FBI is taking cues from the CIA to recruit thousands of covert informants in the United States as part of a sprawling effort to boost its intelligence capabilities.

According to a recent unclassified report to Congress, the FBI expects its informants to provide secrets about possible terrorists and foreign spies, although some may also be expected to aid with criminal investigations, in the tradition of law enforcement confidential informants. The FBI did not respond to requests for comment on this story.

from nytimes: On a night four years ago, five soldiers back from three months in Iraq went drinking at a Hooters restaurant and a topless bar near Fort Benning, Ga.

Before the night was over, one of them, Specialist Richard R. Davis, was dead of at least 33 stab wounds, his body doused with lighter fluid and burned. Two of the group would eventually be convicted of the murder, another pleaded guilty to manslaughter, and the last confessed to concealing the crime.

Now some in Hollywood want moviegoers to decide if the killing is emblematic of a war gone bad, part of a new and perhaps risky willingness in the entertainment business to push even the touchiest debates about post-9/11 security, Iraq and the troops’ status from the confines of documentaries into the realm of mainstream political drama.